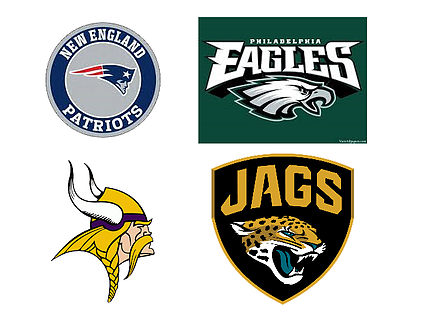 The Super Bowl; a very enthusiastic and emotional American past time. Even if individuals do not follow football throughout the season, they will likely find their way to a neighbor’s or friend’s Super Bowl party. Families and friends gather together, some going all out with football themed paper goods, chicken wings, chili, chips, sodas, beer and participating in office pools (everyone hoping they get the 0,0 box (the box with the highest probability of winning the large final game prize, according to the Chicago Tribune’s calculations). Exciting stuff. Well, if fans think they’ve got game day covered, the NFL and individual league teams prepare in a totally different way and keep a tight lockdown on their intellectual property.

While fans love to cheer phrases in unison and wear them on clothing, the teams work fast and furiously to protect them as trademarks. Take the Minnesota Vikings for example. In this season’s playoffs, the Vikings played the Saints. For Vikings fans, it was a real nail biter and one that ended with a 61-yard play that sealed the team’s five point victory and won a ticket to the NFC Championship Game. That remarkable play would quickly become known as the “Minneapolis Miracle.” The team did not hesitate and in less than a week filed seven trademark applications (most of them intent-to-use): four for “Minneapolis Miracle,” two for “Minnesota Miracle,” and one for “Miracle of Minnesota.” These applications covered everything from clothing to football gear to toys to television and sports programs. The Vikings have a reputation for filing a lot of trademark applications. Earlier in January, the team also filed a use and an intent-to-use based trademark application for the phrase “BRING IT HOME” in hopes the team would make it to the Super Bowl and play in its home stadium.

While the Vikings are on top their trademark game (no pun intended), nothing quite beats the NFL’s fierce protection and enforcement of its SUPER BOWL trademarks (one being Reg. No. 0882283, registered in 1969), except maybe the Olympic Committee (but that discussion is for another article). The Super Bowl is a $13 billion-per-year industry and if the related trademarks are not regulated, the NFL can lose a lot of that money. Authorized sponsors pay millions of dollars to use the phrase SUPER BOWL and therefore if the NFL does not enforce, those sponsors will not bother paying the big bucks to use it. Take a look back at the Super Bowl commercials aired this weekend. You could tell immediately who the official sponsors were by who actually used “SUPER BOWL” in their ads, for example Anheuser-Busch. Those who weren’t, used phrases such as “the Big Game” or “the Birds Game.”

However, it is not just television commercials that are monitored – it’s everything and anything commercial. If you, as an individual or business owner, plan to throw a “Super Bowl” party and charge people to attend – the NFL will find you. Anyone who wants to use any logo or trademark belonging to the league, including “Super Bowl,” “Superbowl,” “Super Sunday,” and multiple other “Super” terms, you must apply to the NFL for a license. A simple 36-page application and a minimum six figure royalty is all you need to be on your merry way to using the NFL’s intellectual property.

Protection of trademarks is crucial, not only for large billion dollar businesses, but for the small start-ups and everyone in between. We can learn from the NFL and the league teams. File your trademarks early and often. Even if you have not started to use them, file an intent-to-use application and send a strong message of your intentions to invest in this mark. And then, very importantly, enforce your marks. The more exclusive your use, the more valuable the marks become.

I leave you with one more interesting regulation strictly enforced by the NFL – bars cannot show the Super Bowl on a TV screen larger than 55 inches if they charge a cover fee. I am not sure how the NFL regulates this, but I would not want to be the bar that gets caught with the 60 inch!