Gene Simmons a/k/a “the Demon” and famous rocker of the band KISS filed a US Federal trademark application, Serial No. 87482739, on June 9, 2017 for “his” devil horns hand gesture (pictured below) covering services in class 41 for “Entertainment, namely, live performances by a musical artist; personal appearances by a musical artist.”

Mr. Simmons claims to have first used this hand gesture on November 14, 1974, during one of his concert performances in KISS’ “Hotter Than Hell” tour.

Out loud sigh… oh Mr. Simmons (or really his attorneys), you are a music legend and I was on a plane with you once, which is pretty cool, but with all due respect, there are many things wrong here. And, with all the chatter about this application, Mr. Simmons must have realized the obstacles he was about to face because on June 20, 2017, he expressly abandoned his trademark application. This was a very smart decision because upon immediately looking at the trademark application, a few things readily came to mind: 1) is this for real?, 2) the claim for exclusivity of use included in every trademark application, and 3) is the drawing correct?

First, yes this was real!!

Second, Mr. Simmons was claiming exclusive rights to the use of this mark covering the entertainment services cited above. Per the declaration that each and every trademark applicant signs upon filing a US Federal trademark application, Mr. Simmons declared that “no other person, firm, corporation, or association has the right to use the said mark in commerce, either in the identical form or in such near resemblance.” Upon making such a statement, this would imply that anyone using this gesture in the context of a live musical performance or artist appearance, would immediately bring to mind Mr. Simmons and would likely cause confusion. Hum…let’s take a step back for a moment and look at the background of this gesture.

The “Sign of the Horns” hand gesture has a variety of meanings across different cultures, from contemporary use by musicians and fans, heavy metal culture, to sports culture. Long story short, this hand gesture is widely used all over the world and means different things to different groups of people. This hand gesture is also widely used by others in the music industry and by other musicians prior to Mr. Simmons’ first claimed use. For instance, Ronnie James Dio, lead singer of Black Sabbath and contemporary to Ozzy Osboure, used it religiously during his performances. But even he noted in a 2001 interview “I doubt very much if I would be the first one who ever did that. That’s like saying I invented the wheel, I’m sure someone did that at some other point.” And he’s correct, John Lennon for instance is seen holding up the gesture on the 1969 animated album cover for the Beatles single “Yellow Submarine/Eleanor Rigby.” 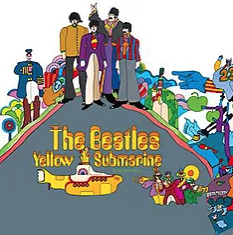 Bottom line, this hand gesture has been used for so long and by so many in the music industry (without any enforcement by Mr. Simmons), that is unimaginable that Mr. Simmons could claim exclusivity of this mark now. This mark has become too generic to be associated solely with Mr. Simmons and for this reason, the application would have likely been rejected by the trademark examiner.

This is not to say however, that similar hand gestures cannot be registered; it just depends on the particular circumstances and facts of the application. For example, The Board of Regents of the University of Texas (UoT) owns and highly enforces its “Hook ‘em Horns” gesture trademark registration, Registration No. 4535612, for “Decals; decorative decals for vehicle windows; stickers”:

Even if Mr. Simmons hadn’t abandoned his application and it successfully registered, he still would have had an up-hill battle to enforce the mark. If anyone used the gesture in the entertainment industry, Simmons would have had the duty to enforcement the mark and stop such use, otherwise he could risk losing his rights (which, just to clarify he really already did due to the mark being generic and his lack of enforcement of the last 50 years). The registration would also likely be the subject of multiple invalidation/cancellation proceedings.

Moving to the third point – the drawing. The drawing submitted is not the typical “horns” gesture because the thumb is extended, making it look more like the international sign for “I love you” or the right side up version of Spidey’s web flinging wrist gesture. And while Mr. Simmons submitted a specimen of use of a hand gesture (pointer finger and pinky upward, ring and middle finger downward, and the thumb extended), the specimen is of his right hand, not the left hand as displayed in the drawing. Therefore, there is an argument that the specimen of use is not an accurate depiction of the drawing. Also, in a simple internet search, Mr. Simmons is seen gesturing with his right hand, left hand, palms facing out towards the camera, palms facing in towards his body, and in some instances in the more traditional “horn” gesture with his thumb tucked in. So what mark was Mr. Simmons exactly trying to trademark? Which one was he claiming he is best known for… all of them? Regardless, according to 37 C.F.R. §2.51; TMEP § 807.12, “the drawing of the mark must be a substantially exact representation of the mark as used on or in connection with the goods and/or services.” This was just not the case in Mr. Simmon’s application.

So I leave you with this: 1) if you cannot claim exclusive use of a trademark in interstate commerce, it will be tough to obtain a registration (unless there is a concurrent use claim involved), 2) if a mark is generic, you will not obtain registration, 3) always be sure your drawing is substantially exact to your specimen of use, and 4) perhaps at the end of the day Mr. Simmons was simply trying to subliminally express his affection towards his thousands of adoring fans, all of whom I can only imagine will reply, we love you too…and that’s not so bad.