Motions to Dismiss on grounds that patents fail to claim patent-eligible subject matter, so called 101 or Alice Motions, have proliferated like dandelions in spring.  It’s the defense du jour for alleged infringers lacking prior art or non-infringement arguments.

Way back when the Federal Circuit was just getting traction, it stated that “the habit of charging inequitable conduct in almost every major patent case has become an absolute plague” Burlington Indus. v. Dayco Corp., 849 F.2d 1418, 1422 (Fed. Cir. 1988).  Fast forward 30 years, and no patent litigator can even remember the last case in which she seriously plead inequitable conduct.  But there is a new darling defense in town; The 101 Motion has taken its place as the new Plague on patent law.

Patent cases increasingly involve very profitable software and biotech inventions.  Both are fertile ground for Section 101 challenges.  Additionally, the abstract nature of these technologies, which can not really be seen or touched, make these issues particularly challenging for courts.  Add a boost from the 2014 US Supreme Court decision in Alice Corp. Pty. v. CLS Bank Int’l, 134 S. Ct. 2347, 2354 (2014) reminding the bar that “abstract ideas are not patentable” and it was off to the races.

Every patent infringement defendant saw it as the answer to their prayers – a panacea for that nasty patent infringement lawsuit from an upstart patent owner. Fast forward a couple years, however, and the cure-all defense of failure to claim patent-eligible subject matter has become more plague than panacea.  Every case seems to include a Motion to Dismiss on this ground, even if the argument must be force-fit to the invention at hand.

Several recent decisions from patent heavy districts in California and Delaware suggest a backlash has started.  The Courts seem to now see these 101 Motions for the plague they have become on patent jurisprudence.

For example, in TriPlay v. WhatsApp, No. 1:13-cv-1703-LPS-CJB, ECF No. 145, at 2-4 (D. Del Nov. 20, 2017), the court denied defendants’ 12(b)(6) Motion under Section 101, going so far as to take judicial notice of the concurrent IPR proceeding to find sufficient evidence that the “video delivery/clickable icon” element of the invention was claimed in a “sufficiently concrete way”.

More recently, in denying a similar Motion to Dismiss, the Central District of California in Hybrid Audio v. Visual Land, 2:17-cv-08968-RSWL-AGR, Dkt No 35, at 6 (April 5, 2018) reminded the bar that the Supreme Court in Alice had warned courts to “tread carefully in construing this exclusionary principle lest it swallow all of patent law.” (quoting Alice Corp, 134 S. Ct. at 2354.) The Hybrid Audio Court went on to draw a distinction between “patent-ineligible concepts” as opposed to “patent eligible applications of those concepts”.  Id.

The very next day, the Northern District of California Court denied a 101 Motion against patent claims generally relating to “automatically refreshing a display screen of a telephone”.  Local Intelligence v HTC, 5:17-cv-06437-EJD, Dkt No 27, at 1 (April 6, 2018).  The Local IntelligenceCourt referred to Figure 5 (pictured below) of the patent in question as “illustrat[ing] the solution in more detail”. Id. at 3. 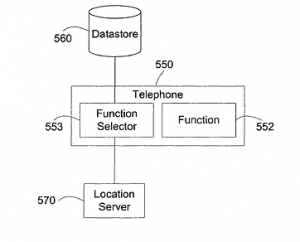 Not so long ago, many patent attorneys would have feared bringing suit on a patent claim represented by Figure 5.

Practice Tip:  Software and biotech inventions are real.  When accused of infringement, don’t be confident in a 101 motion as a panacea.  Find prior art.  Develop a non-infringement argument.