Trademarks can be the cheesy glue that connects a business with its brand in a consumer’s mind. A trademark is a source identifier that can include “any word, name, symbol, or device, or any combination thereof.” 15 U.S.C. § 1127. Trademarks are classified into one of five categories based on their level of distinctiveness: (1) generic (e.g., ASPIRIN, BAND-AID); (2) descriptive (e.g., WINDOWS, INTERNATIONAL BUSINESS MACHINES); (3) suggestive (e.g., CITIBANK, MICROSOFT); (4) arbitrary (e.g., APPLE, SHELL); and (5) fanciful (e.g., EXXON, KODAK).

Arbitrary and fanciful trademarks have the greatest level of protection, while generic terms are not protectable because they describe the type of good. A term is typically classified as being generic if it is used exclusively to describe a product or good and competitors use the term to describe the product they are selling. A descriptive term, while a step above being generic, is only protectable if it has acquired distinctiveness.

Recently, in Illinois Tamale Co. v. El-Greg, Inc., the Northern District of Illinois analyzed an allegedly generic trademark and rights associated with its trademark family. The Plaintiff owns the registered trademark “PIZZA PUFFS” along with other trademarks that include the term “PUFFS,” (for example “GYRO PUFF,” “HAM, CHEESE, & JALAPENO PUFF,” “HAM & CHEESE PUFF,” “PULLED PORK BBQ PUFF,” “SPINACH & CHEESE PIZZA PUFFS,” “TACO PUFFS,” “BUFFALO CHICKEN PUFF,” and “REUBEN PUFF”) and claimed use of “PIZZA PUFFS” since the 1980s. Plaintiff sued the Defendant for trademark infringement based on Defendant’s use of the term “PIZZA PIES™ (PUFFS).”  The parties’ products are sold side-by-side and both use similar slogans (Plaintiff uses “MAKERS OF THE ‘ORIGINAL’ PIZZA PUFFS” and Defendant uses “MAKERS OF THE ‘ORIGINAL PUFFS’”). Below are images of Plaintiff’s labeling (top) and Defendant’s labeling (bottom). 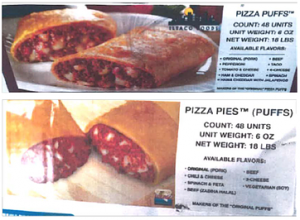 Despite the evidence that both parties provided, the court denied both parties’ motion for summary judgment regarding the genericness of “PIZZA PUFFS” because it found that both parties presented evidence that “is not so one-sided that there can be no doubt about how the question should be answered.” More specifically, the court concluded that a reasonable juror could find both that the “PIZZA PUFFS” mark is not generic, and that the use of the term “pizza puff” describes a “pizza-flavored dough-based product” rather than a specific brand. Regarding the family of trademarks, the court concluded that a reasonable factfinder could conclude that the family of trademarks is valid, based on evidence showing that consumers believe there is a family of marks based on the common “Puff” element. Since both parties’ summary judgement motions were denied, the case is pending a trial date and/or settlement discussions.