A petition for IPR must include a statement regarding how each challenged claim is to be construed.[2] 37 C.F.R. § 42.104(b)(3). Claim terms “are generally given their ordinary and customary meaning.” Phillips v. AWH Corp., 415 F.3d 1303, 1312-17 (Fed. Cir. 2005) (en banc). However, when means-plus-function claims are challenged, “the [petitioner’s] construction of the claim must identify the specific portions of the specification that describe the structure, material, or acts corresponding to each claimed function.” 37 C.F.R. § 42.104(b)(3). After claim construction is provided, the PTAB then determines whether to institute the petition (i.e., conduct substantive review of patentability) based on whether “there is a reasonable likelihood that the petitioner would prevail with respect to at least 1 of the claims challenged in the petition.” 35 U.S.C. § 314(a).

In Facebook, the petitioner asserted that U.S. Pat. No. 6,732,181 (“the ’181 patent”) was obvious in light of the prior art. The ’181 patent “relates to service management of digital communications networks and, in particular, to the management of communications services from a service provider by a customer of the provider.” U.S. Pat. No. 6,732,181 at Col. 1, l. 10-13. Illustrative means-plus-function limitations of the ’181 patent include “means to store a list of users including user access type, identification, password and name,” “means for a user to input identification and password information,” and “means at said server to compare said user input information with stored information and based on user verification and user access type provide said user with a list of other users for which said user has access.” U.S. Pat. No. 6,732,181 at Claim 5. 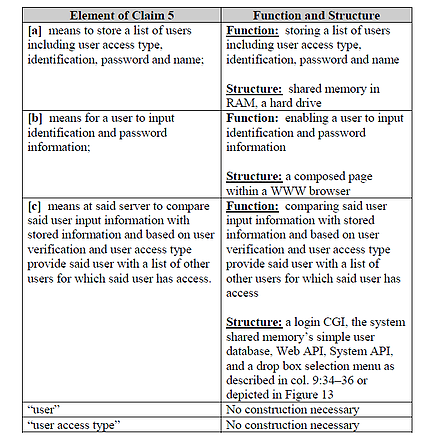 The PTAB held that the petitioner’s claim construction failed to comply with 37 C.F.R. § 42.104(b) and did not adequately “link” the recited structure with the claimed functions. See Medical Instrumentation & Diagnostics Corp. v. ElektaAB, 344 F.3d 1205, 1220 (Fed. Cir. 2003) (“[S]tructure corresponding to the claimed function must be disclosed in the specification with clear linkage between the structure and the claimed function.”). The Board denied institution for this reason:

Petitioner does not “identify the specific portions of the specification that describe the structure, material, or acts corresponding to each claimed function,” as required by our Rules (37 C.F.R. § 42.104(b)), to enable us to determine if the asserted prior art teaches such structure. Thus, Petitioner fails to demonstrate a reasonable likelihood of prevailing in its challenge.

Facebook, Paper No. 14 at 16 (emphasis added). With respect to subsection [c], the Board also held that the petitioner did not recite corresponding structure for “each” claimed function because the petitioner’s citations did not clearly correspond with both claimed functions of “comparing” and “providing.” Id. at 9. In addition, although the district court adopted the patent owner’s (and thus the petitioner’s) claim construction while the IPR petition was pending, this “[did] not relieve Petitioner of its burden to comply with [the] Rules for inter partes review.”[4] Id. at 15.

Petitioners for IPR should ensure they have adequately recited and analyzed the structure of an invention (as disclosed in the specification) corresponding to any challenged means-plus-function claims.

Even if structure from the specification is adequately recited, patent owners should consider challenging the extent to which the petitioner compares the recited structure with the prior art.

[1] These cases present nearly identical analyses except the petitions for IPR are directed to different patents. For simplicity, only IPR2017-01006 is assessed herein.

[3] Because the ’181 patent was set to expire within 18 months from entry of the Notice of Filing Date Accorded to Petition, the patent owner made request pursuant to 37 C.F.R. § 42.100(b) for claim construction to be commensurate with that of a district court’s review, (see, e.g., Phillips v. AWH Corp., 415 F.3d 1303, 1312-17 (Fed. Cir. 2005) (en banc)), rather than the “broadest reasonable interpretation” standard applicable to unexpired patents. See In re Rambus Inc., 694 F.3d 42, 46 (Fed. Cir. 2012) (“While claims are generally given their broadest possible scope during prosecution, the Board’s review of the claims of an expired patent is similar to that of a district court’s review.”) (quotation omitted); see also 37 C.F.R. § 42.100(b) (“A claim in an unexpired patent that will not expire before a final written decision is issued shall be given its broadest reasonable construction.”).

[4] Even considering the district court’s claim construction, the Board held that “the cited portions of the ’181 patent Specification do not provide identification of sufficient structure” required by the PTAB rules and Federal Circuit case law.