Drones, or unmanned aerial vehicles (UAVs), have been in development since the early 1900s, but only in the last 20 years have they become popular with the realization of their wide-ranging application. Companies have been discovering new uses and potential benefits of drones in commercial, industrial, military, aerospace, scientific, and recreational areas. According to Teal Group, a market analysis firm, production of drones over the next ten years will total $73.5 billion, with commercial use leading the way as the fastest growing civil sector.

The surge of patent applications filed at the United States Patent and Trademark Office for UAV-related technology in the past several years is due in no small part to the recent momentum in this industry. Figure 1 illustrates a dramatic increase between 2011 and 2016 in the number of applications that include or involve UAVs at some level. Other patent offices are experiencing similar trends in the number of filings.

Many of the top filers of UAV-related applications in the US are traditional aeronautics and aerospace companies. As shown in Figure 2 below, companies like The Boeing Company, Lockheed Martin Corporation, Honeywell International Inc. and Airbus Group N.V. account for a substantial portion of the applications. However, civilian and recreational drone manufacturers have started to build their patent portfolio and may soon match the quantity of filings made by the large aviation companies. Amazon with its ambitions for delivery drones has also been leading the charge in obtaining patents for various UAV technology. In 2017, Amazon has been granted at least 52 patents, including speech interaction for unmanned aerial vehicles (US 9,747,901), delivery drones that scan your house to make personalized recommendations based on collected data (US 9,714,089), and car-charging drones (US 9,778,653). 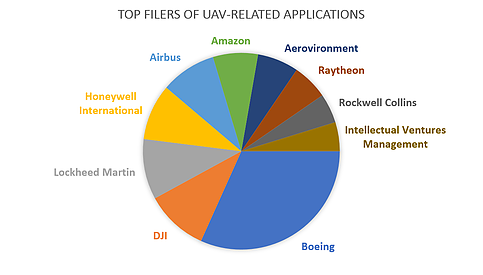 As the UAV industry continues to soar to greater heights, there will be no shortage of innovation. It will be critical for companies to seek patent protection in order to establish their foothold in the UAV industry. WHIPgroup is experienced in securing patents in aviation and software technology and are ready to assist all in claiming a piece of the UAV pie.