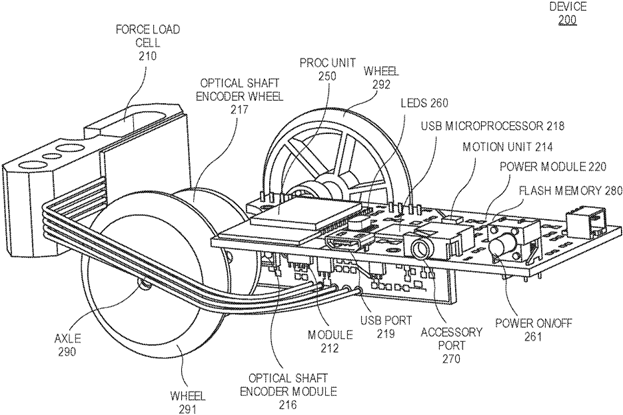 The United States District Court for the District of Oregon has ruled that a patent on a classroom science experiment is not invalid under 35 U.S.C. § 101. This will further help the patentability of new inventions that may have once been considered abstract and unpatentable.

PASCO Scientific brought sued Vernier Software & Technology for infringing two of PASCO’s patents by releasing the “Go Direct Sensor Cart,” a Vernier Product which PASCO alleges is nearly identical to their own “Smart Cart.” Vernier responded by filing a motion to dismiss for failure to state a claim, arguing that PASCO’s patents were invalid under 35 U.S.C. § 101. The District Court for the District of Oregon found that PASCO’s two patents, US 10,481,173 and US 10,753,957, a continuation of the ‘173 patent, for a wireless device with integrated force, position, acceleration, and rotational sensors, covering PASCO’s “Smart Cart” which is used in science education, were not invalid under Alice Corp. Pty. Ltd. v. CLS Bank Int’l.

PASCO’s design eliminates the need for wired connections by physically integrating the data collecting sensors into the cart and using a wireless RF communication, such as Bluetooth, to send the data to a computer. By connecting to the computer wirelessly, the accuracy of the data collected is improved as the moving cart is not limited or tethered by wired connection. The design also incorporates integrated force, acceleration, rotational sensors. Integrating a force sensor eliminates the need for a grooved track which was previously required to ensure the cart was aligned with an external force sensor. By incorporating an accelerometer, PASCO’s cart is able to further improve accuracy by directly measuring acceleration instead of calculating it based on measured position. Lastly, by adding a gyroscope, the cart is able to measure its slope with higher precision than the previously available manually controlled external slope sensors.

Under the two-step analysis of Alice, a patent is eligible under 35 U.S.C. § 101 unless it is directed at a patent-ineligible concept and is not sufficiently inventive to be considered a patent on something other than the ineligible concept. The court ruled that the first step was not satisfied, finding that patents were directed at a “new and useful improvement of a machine,” the improvement being more accurate simultaneous data measurement that plagued prior art. PASCO accomplished this increased accuracy by integrating the cart’s accelerometer, gyroscope, and force sensor into the cart, eliminating the need for wired connections to sensors. Additionally, the court found that PASCO’s patents were for a “machine . . . used in the process of teaching” rather than a technique of teaching which the court said was a patent-ineligible concept. The court declined to view PASCO’s patents as merely collecting, analyzing, and presenting information, as it would have been “oversimplification that the Supreme Court and the Federal Circuit have cautioned against.”

The court also discussed the second step of Alice. While agreeing that conventional and generic parts were used in the patents, the design was sufficiently inventive through its positioning of components as discussed earlier. PASCO’s patent also eliminated the need for grooved tracks and external sensors to accompany the cart, resulting in improved flexibility in their product.

This ruling provides help for inventors developing machines for data collection in an educational setting or beyond. The decision shows that while data collection alone is an abstract concept, a patent aimed at solving problems in data collection can still be upheld. It also emphasizes that when analyzing whether a patent is directed at an abstract idea, oversimplifications must be avoided.

Meghan McDermott is a rising 3L at UConn Law. At UConn Law, Meghan is a student associate at the Intellectual Property and Entrepreneurship Law Clinic, an Executive Editor of the Connecticut Law Review, and a member of the [Read More…]