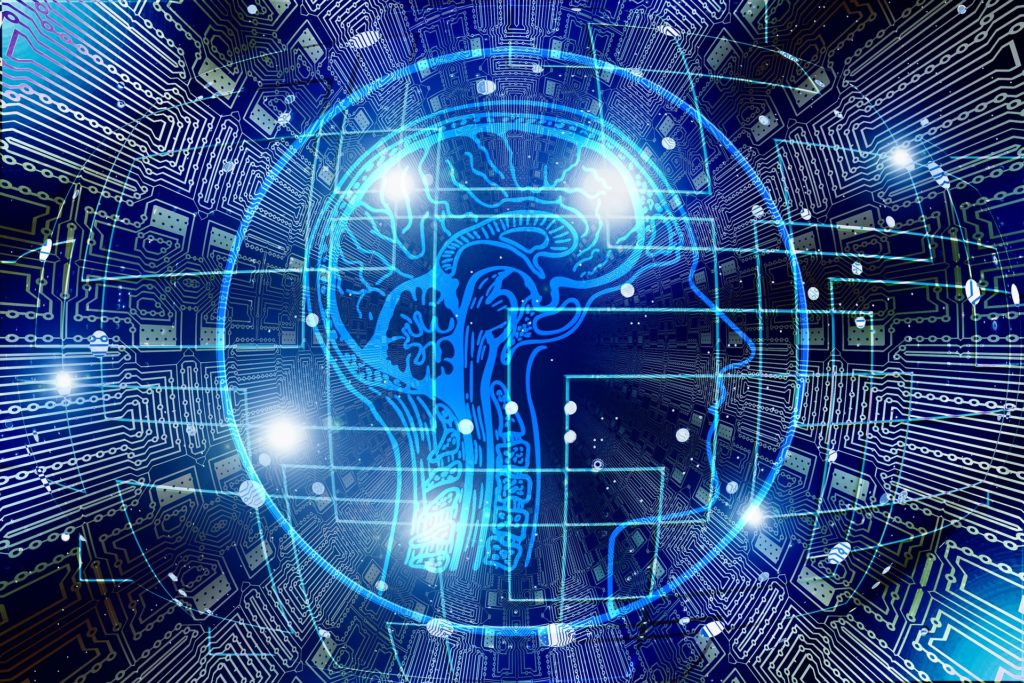 Back in the early 1960s, an American animated series called The Jetsons presented audiences a glimpse of how life may be in the future.  The show has accurately predicted – or perhaps shaped – many of the inventions we have today, from robotic vacuum cleaners and talking alarm clocks to flat screen TVs, video chats, and smart watches.  This is no more evident than in the show’s character Rosie, which is an artificial intelligence (AI) robot that served as a housekeeper for the Jetson family.

AI technology has mainly been used as productivity tools for performing various specified tasks and activities.  However, with advancements over the past 50 years, AIs are no longer being programmed to solve a single specified problem and are beginning to engage in creative processes.  In 2016, an AI computer analyzed pixel-by-pixel thousands of paintings by the Dutch artist Rembrandt and 3D-printed an original portrait entitled The Next Rembrandt.  AICAN, an AI system developed by Rutgers University, has also created a collection of original artworks.[1]  AIs have also made headway in creating music as well as composing poems.[2],[3],[4],[5]

With the gradual blurring of boundaries between what defines human from machine, AI may now have the capacity to invent.  DABUS, an AI creativity machine built by Dr. Stephen Thaler (US 5,659,666; US 7,454,388), recently developed two new ideas: a food container based on fractal geometry and an illumination device that flickers in a pattern that mirrors brain activity for attracting enhanced attention.[6],[7] In fact, patent applications for both ideas and naming DABUS as an inventor have recently been filed in the European Patent Office, UK Patent Office, and the US Patent and Trademark Office (USPTO).  The important issue facing the patent offices is not whether the ideas are novel; it’s whether an artificial intelligence may be granted a patent in the first place.

Inventorship is an important requirement in obtaining a patent.  Article I, Section 8 of the Constitution, declares that “Congress shall have power … To promote the progress of science and useful arts, by securing for limited times to authors and inventors the exclusive right to their respective writings and discoveries.”  Such decree is codified in 35 U.S.C. § 101, which provides that “Whoever invents or discovers any new and useful process, machine, manufacture, or composition of matter, or any new and useful improvement thereof may obtain a patent therefor.”  Although this statute does not explicitly use the words “person” or “human,” the pronoun “whoever” would appear to indicate that only people can obtain patents.  With the America Invents Act, 35 U.S.C. § 100 provides definitions for key terms, including “inventor.”  Nevertheless, § 100 does not provide additional clarity and merely states that “The term ‘inventor’ means the individual or, if a joint invention, the individuals collectively who invented or discovered the subject matter of the invention.”[8]  To muddy the water some more, § 100 explicitly uses the words “person” and “persons” to define other terms.[9]  This begs the question whether the word “individual” used in the definition of inventor is intended to mean something more than just a person.  If this is the case, would an AI be considered an “individual?”

The USPTO’s Manual of Patent Examining Procedure (MPEP) – albeit not law – submits that an inventor must contribute to the conception of the invention, and specifically provides the definition of inventorship as:

The MPEP also states that in arriving at conception, the inventor may consider and adopt ideas and materials derived from many sources, so long as he maintains intellectual domination of the work of making the invention.[11]  If Dr. Thaler did not contribute to the conception of the food container and the illumination device, then it would appear that he is not the inventor and would have no claim to any patents directed to the ideas.  If AI such as DABUS cannot be an inventor, who then would have a claim to the patents?  However, an argument can be made that the AI is merely a tool being used by the programmer(s).  That is, the AI programmer and/or person who feeds the inputs into the AI and recognizes the importance of the ideas that output from the AI possesses intellectual domination and is therefore the inventor.

If there’s any hint as to how the USPTO may decide, look no further than the U.S. Copyright Office.  The Copyright Office enforces a human authorship requirement, where it will register an original work provided that it was created by a human being.[12]  The U.S. Supreme Court has similarly held that copyright law is limited to human authors.[13] In 2018, it was held that a monkey, because it was a non-human, cannot own a copyright.[14] One thing is for certain, it will be a while before there is a definitive answer to whether artificial intelligence can be named as an inventor in patent applications.

WHIPgroup’s patent practice aggressively seeks protection for inventions and is prepared for all advancements in technology and the impacts they will have on the IP landscape.

WHIPgroup Successfully obtained patent allowance with an Appeal Brief. The invention is directed to an agitator ball mill, and has cams with specific ratios that improve mixing, cooling, and durability. The Patent Office rejected all [Read More…]

WHIPgroup successfully argued two applications before the Patent Trial and Appeal Board (PTAB) and obtained favorable decisions reversing written description and obviousness rejections. Both applications relate to a novel firearm cartridge that is designed to [Read More…]