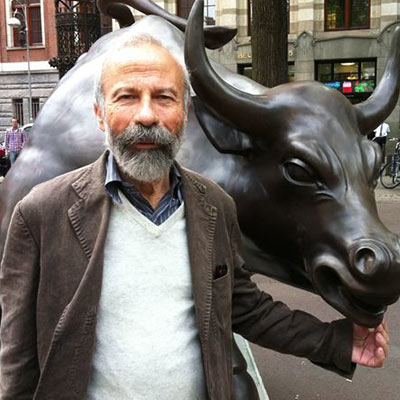 About the Artist: Arturo Di Modica

Arturo Di Modica is best known for creating his world famous Charging Bull sculpture which he dropped illegally during the middle of the night on 15 December 1989 outside of the New York Stock Exchange as his gift to the American people. Having arrived in the U.S in 1970 penniless, he had risen up to success and felt indebted to America for everything it had enabled for him. After the 1987 Black Monday stock market crash, he had the idea to create a sculpture intended to inspire all who came into contact with it to carry on fighting with ‘strength and determination’ through the hard times for a brighter future. He spent the next two years working on the sculpture paying all of the $350,000 production costs himself.